FILMING IN RIO DE JANEIRO: WHAT YOU NEED TO KNOW The city of Rio de Janeiro is known for its scenic landscapes, lush green mountains, beaches and many landmarks. Within city limits one will find Brazil’s most famous postcards. The city also hosts the world’s largest street Carnaval parade, which happens between February and March, and is considered a cultural center. Its mix of modern and old buildings, beaches, mountains and lush nature gives the city a natural charm. That’s why Rio de Janeiro is one of the most sought-after locations by our clients. From the Corcovado peak and the Christ the Redeemer statue, to the Sugarloaf Mountain, from Copacabana and Ipanema Beaches, to Guanabara Bay, Tijuca Park and beyond, Brazil Production Services’ fixers are available to scout out all locations in advance for your project and produce full reports that can include sun charts, varied angle pictures, 360º location videos, nearby parking options and anything else that your project requires. We have great contacts with local crews, equipment rental houses, transportation and security companies and can get your production up and running in Rio in no time at all.

Is Rio de Janeiro your shooting location in Brazil? Contact us today and let us know about your production needs in the city!

The weather in Rio is very unpredictable, especially during the Summer months. Rain often comes suddenly and without warning, but it’s usually for a short period of time, and it can range from a drizzle to a heavy thunderstorm. The Summer season in Rio de Janeiro is usually hot, wet and mostly cloudy while Winters are drier, cooler and mostly clear. Over the course of the year, local temperature varies from 18ºC (65ºF) to 32ºC (90ºF), however, it is not rare for thermometers to register 40ºC (100ºF) during Summer (December – February).

Peak rain days in Rio de Janeiro occur in December and January, but the wet season lasts from the end of October until beginning of April. Driest months are April to October, with June and July being the driest months of the year.  Please see the rain and temperature chart below: 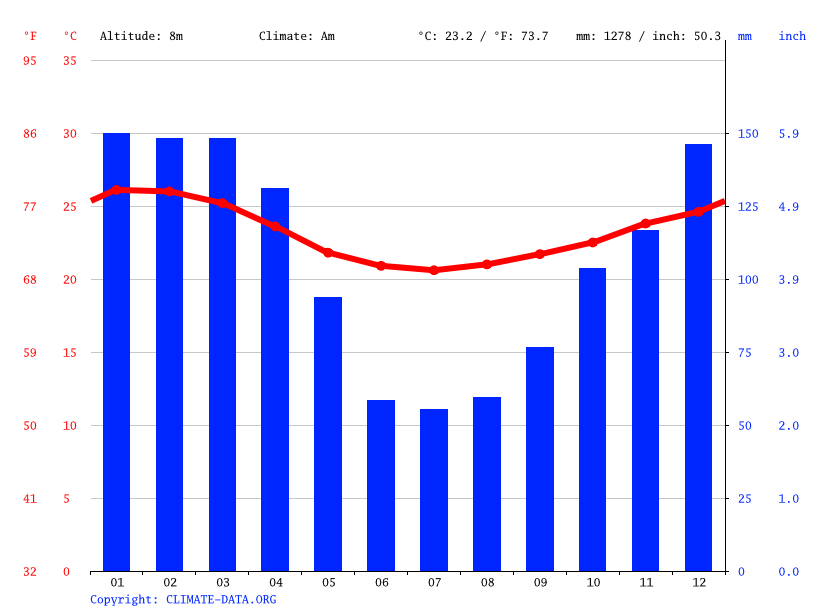 You can find more detailed information about the weather variations in Rio de Janeiro here.

PLANNING TO SHOOT IN RIO DE JANEIRO? WE HAVE THE BEST LOCAL PARTNERS AND ENGLISH SPEAKING CREWS

Rio de Janeiro has a strong audiovisual market, with lots of series, films and soap operas shooting in the city all the time.  The Globo network (4th largest media conglomerate in the world) is headquartered in the city.  Foreign shoots often want to shoot in Rio as a location, so, over the years, local vendors and crews have built good infrastructure for a local production’s needs. Brazil Production Services has the best local partners, including rental houses for your equipment needs, experienced transportation companies, English speaking crew members, drone operators, security guards and a whole network of highly qualified industry professionals that we will call upon and manage to work on your production.

We have shot dozens of productions in Rio de Janeiro, from small scale documentaries to large feature films and commercials.  A recent example was Netflix’s Sergio.

Are you planning to shoot in Rio de Janeiro? Contact us today and let Brazil Production Services be your partner and make sure your project goes smoothly from the start!

Rio de Janeiro is not as safe as most cities in the United States or Europe.  Many parts of the city experience a lot of violent crime and theft.  You should take special precautions and pay attention to your surroundings when walking around to avoid muggings and pick-pockets. It is not advisable to carry cell phones, cameras, jewelry or other valuables conspicuously while walking through the city’s streets. If possible, don’t walk alone, especially at night.

Consult with your Brazil Production Services fixer and/or office coordinator before going on outings or visiting tourist spots to check about specific safety tips. We always say that if a situation doesn’t feel right, cross the street, walk into a store, walk away.  We recommend trusting your instincts as opposed to being afraid of being rude to somebody.  Finally, when walking in groups of foreign people, be discrete, don’t call unnecessary attention to yourselves and don’t make it obvious that you are not Brazilian. We don’t want to scare anyone, we just want you to be safe.

When producing a shoot in Rio de Janeiro, whether on the beach, downtown or on city streets and other open spaces, it’s essential to always have security professionals keeping a close eye on equipment and crew members. For our productions, we usually recommend having at least one security guard when filming in Rio de Janeiro (same applies for São Paulo and other big cities as well) but oftentimes we engage more than one security guard.  We work with off-duty police officers as well as specialized security companies that are well used to working on film shoots.

Do you need help booking armed or unarmed security guards in Rio de Janeiro? Contact us today for a safe shoot in Rio. For more information about how we handle security in Brazil, click here.

RIO DE JANEIRO IS A BUSY CITY WITH HEAVY TRAFFIC Rio de Janeiro is a busy city, with a very particular topography featuring high mountains, beaches and forests.  Given its geographical features and size, Rio’s traffic can be unpredictable, with rush hours being especially intense on Fridays and weekdays. The BPS local fixer assigned to your production, along with the BPS office coordinator responsible for your project, will make sure to recommend the best approach for your team in terms of transportation and make sure your project sticks to the schedule while considering traffic and peak hours: whether that means finding accommodations that are closer to the filming location or setting an early call time. Everything will be planned according to your project’s needs and budget. Rio de Janeiro has two main airports: the Galeão Airport (GIG) and the Santos Dumont Airport (SDU). The first one is international, with flights coming in and out from multiple destinations in the world and the second is a domestic airport. Both airports also serve as domestic hubs for other regional Brazilian airports, providing easy access to the rest of Brazil should a shoot involve multiple locations.

In the past few years, Rio de Janeiro has attracted a growing number of international productions, such as The Expendables, The Incredible Hulk, Fast Five, Twilight and Sergio, the last one being locally produced by Brazil Production Services.

If you have a project that requires filming in Rio de Janeiro, please send us the details by filling out this form and one of our office coordinators will get in touch with you.